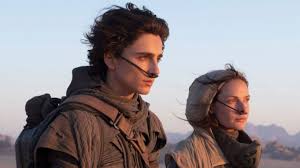 “Dune” is based on the book of the same name by Frank Herbert. There was a film titled “Dune” that was released in 1984 (which is seriously underrated). “Dune” (2021) has no correlation to the original film because it’s a new iteration of the story. There’s a lot that can be said about the movie, from the AV (audio/video) to the acting  and writing. For full transparency, I have never read the novel. I’ve only seen the 1984 film and now the 2021 film. “Dune” is one of those very few films that have received praise from both sides of the viewership. The viewership being both book readers and first time movie watchers. Overall, I thought that “Dune” was an astounding atmospheric epic that should be seen in theaters rather than on streaming services. The movie starts up with a brief interaction between the main protagonist, Paul, and his mother. It then cuts to an interaction between Paul’s father, Duke Leto Atreides, and some Attendant of the Emperor. The meaning of this meeting is to hand over planet Arrakis to House Atreides. Planet Arrakis was occupied by House Harkonnen before discussions were finalized. The outcome of this negotiation leaves the Harkonnens unpleasant. And this is what sets the ground for the film moving forward.

I thoroughly enjoyed almost every aspect of this film. My only gripes about it are pretty nit-picky and I’m sure not everyone will feel the same. Let’s start with the negatives first. My main issue with this film was Paul’s actor, Timothée Chalament. For clarification, I don’t think that he’s a bad actor. I just don’t like his work in this film. He gives Paul a sort of edgy but stoic feel, and it just doesn’t work for me. In almost every scene that features Paul and other characters, it feels like Paul is just there to be there and doesn’t have real importance. My other small pet peeve was that every once in a while, when the screen is full of CGI, it tends to be soft and that leads to a slightly blurry image. I’m certain that not everyone will notice this, but it stuck out like a sore thumb to me.

Now that the bad is out of the way, let’s take a look at some of the great parts. The visuals in this movie are absolutely stunning. Some people may think that the lingering wide shots are boring, but I can’t see that happening when the glorious Hans Zimmer is a part of the OST (Original SoundTrack). Hans Zimmer is, in my opinion, the greatest musical composer of all time for the cinema. Every piece he does is just simply amazing. If you listen to each piece on their own, they each tell you a story that’s packed full of emotion. And the emotion is only amplified when it’s paired with the insane visuals that this movie has to offer. The costume design was also top-tier; everything looked awesome and mysterious. From what I’ve heard, the costumes closely resembled how the books described them. I can’t speak too much on that but I promise you that they looked better than the costumes in the 1984 film. The story was also stellar to an extent. The film is roughly two and a half hours long and the ending of the film just suddenly appears out of nowhere. It ends so abruptly that it’s hard to believe that was the ending. If they make a second part then this movie is one of the best book-to-film adaptations out there. But if they don’t, it’ll be one of the worst.

Overall I thought that “Dune” was an excellent film. At the end of the day I’ll give it a 8.5/10. If we get a sequel, my score will be bumped up to 9/10. but as of now it’s going to stay where it is. I highly recommend that everyone check this film out in theaters rather than on HBO Max.