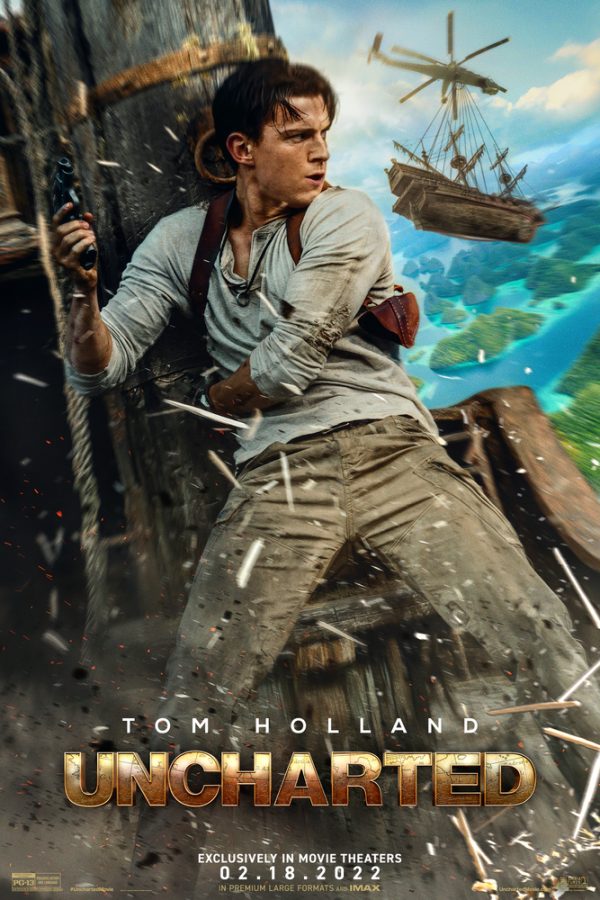 I don’t play video games but I can tell you this. As far as Uncharted goes, it certainly is a movie that was based on a video game. The plot contains little room for character development and only serves as a way to explain how and why characters are going from one place to another. And to, of course, set up action sequences which are actually pretty good. The characters are probably the weakest point in the film.

The film follows our main characters Nathan Drake (Tom Holland) and Victor “Sully” Sullivan (Mark Wahlberg). Nathan Drake is a thief/bartender and Sully is an untrustworthy treasure hunter that used to treasure hunt with Nathan’s brother, Sam. Nathan is characterized as a hopeful and naive treasure hunter who is great at problem solving but is still very new to the game. This character is fine and fairly engaging even if it is just Holland giving his usual performance. However, the character that suffers the most in the characterization department is Sully. Sully doesn’t have a lot of personality. All he does is tell Nathan not to trust anyone—even though it seems that Nathan can trust him despite the fact that everyone talks about how untrustworthy Sully is, but we never get to see it. Since we don’t really get to see Sully shown as untrustworthy a lot besides what people say about him, it makes his “character development” feel flat and underdeveloped.

The story has 3 bad guys Braddock (Tati Gabrielle), Santiago Moncada (Antonio Banderas), and Chloe Frazer (Sophia Taylor Ali). There isn’t much to say about Santiago. Braddock is fine. She is really awesome and has a lot of great fight moves even if she isn’t given a lot of personality. However, no other characters in this movie have a lot of personality either. The last bad guy is Chloe Frazer, who is actually a pretty morally gray character that switches sides. She does this based on whatever will benefit her the most. This could make her a pretty cool lone wolf character but she’s not very smart and often needs help from or needs to take work from other characters. Chloe’s relationship with Nathan feels very underdeveloped. It also makes both characters look stupid whenever they trust each other because they are on opposite sides.

Okay, so, despite some of the weaknesses in the plot, the action is pretty cool, especially the final scene. That being said because some of the action is so over-the-top, it often feels like it doesn’t have a place in the story or that there is no way the characters should have been able to survive what happened but I suppose this movie isn’t supposed to involve a lot of thinking. For example, something in the movie that you shouldn’t think about too much is when characters use sleight of hand to steal objects off of other characters. The movie seems to think that sleight of hand is the same as being able to teleport objects into your hand (even when the object is clearly all of the way across the room). Another small problem I had with the action was the fact that the bad guys usually got taken out by either other bad guys or by being hit by other objects. This not only made the heroes look kind of incompetent but it also made the villains deaths pretty comical and it was hard not to laugh at some points.

I would give Uncharted 2 out of 4 cougar paws. The action in this movie is incredible but the writing is pretty weak when it comes to the character development. This also applies to the overall plot but at least the film is still some good mindless fun.