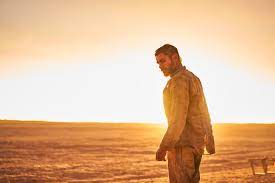 “Gold” is a very unusual film. It’s one that’s definitely not for everyone for it has some slightly disturbing scenes scattered throughout the film. The film was directed by Anthony Hayes and stars Zac Efron. It features a setting that has a pretty strong resemblance to that of the Mad Max series and it’s set “sometime” in the future. The main premise is that Zac Efron’s character is wanting to go to the Compound. The Compound is never really talked about and all we know is that you’d wanna go there to get a second start on life. In order to get there, however, he has to get a ride from some guy. Sometime along the way Zac Efron’s character finds a giant mound of gold. He and this guy decide to have Efron’s character wait by the gold, all by his lonesome, in the desert. From here on, the movie starts to fire on all cylinders. Without spoiling the film, let’s hop into the good and bad of the film.

For starters, this is a very artistic film that, at times, feels like the director chose to focus on more style rather than substance. Which isn’t necessarily a bad thing, it just depends on the person. This film has quite a few gorgeous scenes to just gawk at. If I wasn’t at a theater and I was at home watching this, I definitely would’ve paused it during some scenes to just take it all in. I can’t stress enough how gorgeous this movie is. The use of practical effects were without a doubt top notch. Especially the SFX (Special Effects) added to his face and neck. Another thing this film excelled at was proving that Zac Efron isn’t just some disney star gone awry. He’s also a formidable actor that one day might be able to reach the same heights as some of the greats. His performance was definitely a highlight for this film. The setting was also nice because it was a nice backdrop for the main theme of the film, which was Greed and how far a man is willing to go because of it.

The majority of the good is out of the way so now let’s take a look at the bad. This film has some pretty bad pacing, especially for the run time. The film comes to a whopping run time of 1 hour and 37 minutes. Despite that short runtime, this film feels almost double that. It could’ve been paced out a lot better. The only other main issue I had was that at times the film just didn’t make all that much sense. During the climax they definitely could’ve explained some of it better. Like I said originally, Hayes’ seems to have chosen style over substance.

At the end of the day I had an overall enjoyable experience with “Gold”. It had some great highlights and a couple negatives but overall it was very enjoyable. I’m going to give it a solid 7.8/10. It’s a much smaller film than most but if you can find it in a theater near you then I recommend it for those who aren’t easily disturbed.