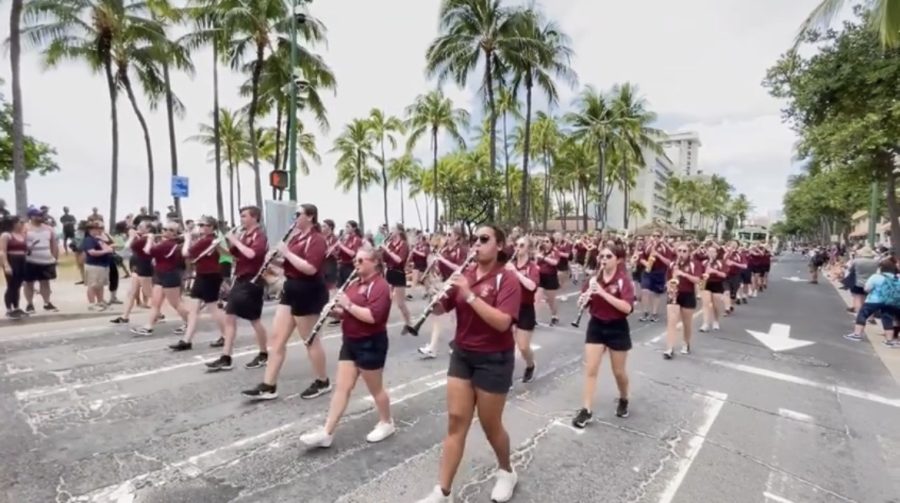 In the middle of March the Lakeville South Marching Band traveled to Hawaii. They initially were supposed to travel to Ireland for St. Patrick’s day but, because of strict out of country restrictions, the band decided to perform in Hawaii instead!

The band had a couple of separate performances in Hawaii. After a brief visit to the U.S.S. Arizona Memorial, the Lakeville South Jazz Band played many lively music pieces on the dock next to the U.S.S. Missouri Battleship. Many tourists and employees stopped to enjoy the music throughout the performance. People danced and celebrated with the music. The LSHS Choir was also in Hawaii at the time so they performed some songs at the U.S.S.  Missouri too.

A couple days later, the Marching Band had the amazing opportunity of performing in Hawaii’s  Saint Patrick’s Day Parade. Before marching in the parade, the band practiced on the beach and in a local park. The excitement levels were very high that morning and into the afternoon. It was felt through the entire band and the excitement was expressed throughout the parade. There were smiles on everyone’s faces. The crowd was especially happy to see the band. There were many people cheering and dancing up and down the street. The spectators took out their phones in awe, all wanting to capture a memory of the LSHS band performing. It was a performance the band will definitely never forget

Going to Hawaii was an amazing experience for the band. They left a look and feeling of hope and celebration where they played.